We got the privilege to go to Oak Island near Wilmington, North Carolina this past weekend.  Our payment for staying was fixing up some decking and a screen door for our rental house.  (And someone's serpentine belt for there Tahoe)

Friday consisted of mostly driving and pitstopping.  We arrived around 6pm and decided to stroll the beach and eat some some seafood by the sea.

We finished up repairing on Saturday evening but the wind had picked up too much to fly most things.  Nevertheless we dragged all the big toys out to the beach only to see there was no beach.  High tide was fully in.  Enough for a lawn chair and a cooler.  Sigh

Then came Sunday, despite forecast of thunderstorms, it was bright and sunny!  Kite flying was optimal and we got everything up!  We gave a few kites away, and some kids walked away with bigger smiles than they came.  We met many inquisitive people though out the morning and afternoon.  It was a great day.  It was a great vacation.

It was a wondeful, wondeful day!  Bright and Sunny and did I mention Windy!?  We got there a little earlier this year because we had a lot to set up.  We had a little workshop going to make paper sled kites for the children.  Around 12:30 the people started to come in droves.  I think it was a record year for attendance, which surprised us since it was the day before Easter this year. 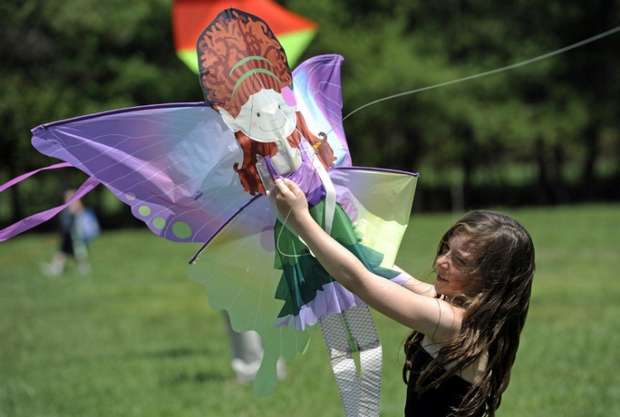 It was relatively calm for the first hour, which gave us plenty of time to attend to inexperienced kite flyers and the paper sled work shop.  Then the wind started to pick up and things really took off.

There were dozens of diamonds and sleds along with some beautiful parafoils and deltas.  We even got to see a French Military Box kite as well!  As for BHK, we took our Rhombi ball and a huge Fishy Ball abour 18 feet in dia.  We had a few parafoils up and a squid.  The higlight of the day was when we got a 63 diamond arch train up and the 25' jellyfish.

Now the jellyfish has a bit of a story to it. . .  Since it was a prototype fresh from The Cave, we just tested the inflation while holding the bridles only.  Hearing the applause in the background and the photjournalists fireing away we got a little to excited and reached for the nearest roll of string to tie the bridles too.  Now the bridles can handle a 250lb break but we (for whatever reason)  put only 50lb test line on.  The kite bounced around for a second then shot straight into the air.  It was beautiful!  Then SNAP!!!  We finally in horror releaized our error and went chasing after the glob of fabric that ended up tangling itself into a tree and briar thicket in a marsh about 25 feet up in the air.  With the help of a 21 foot banner pull and some tree climbing we were able to pull the kite down and cut it loose from the bridles.  Very little damage, but we nee to bridle again.  Sigh. . . 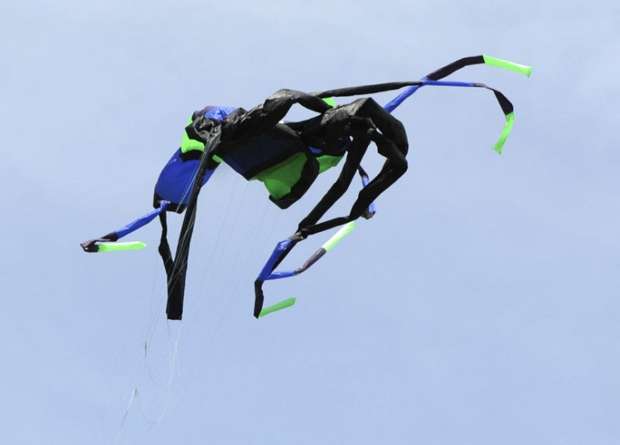 So you can see, anyone can mess up.  But, it did make for good drama for the newspapers. . .

Overall it was a great success and everyone had a great time!  We are already scheming about what to do next year!

Well, the weather is becoming warmer and we sniffed a bit of spring coming in.  It's got us excited about the upcoming festivals this spring, and the ideas are flying. . .(no pun intended)

First up,  Are sewing machines are in the shop so we're just idling for now.  We did come up with a new kite design for this year!  Hopefully we will make several size versions with a multitude of color options. More info. on this when we actually get to making them.

Another great idea from the Cave was to print out hundreds of paper templates to be made into paper sleds.  We're going to use some solid bright colors and a few outline drawings of a dragon and a butterfly for kids to color in with crayons.  There is nothing worse than a kid going to a festival without a kite to fly!

With the weather being so bright and sunny with mild breezes it's hard to keep sewing in here.  Maybe the broken sewing machines are a blessing in disguise after all.

Start a Free Blog at Webs.com